On one hand The Sevenstar can be looked at, as no more than a shiny plate engraved with some hieroglyphs. On the other hand it can be seen as a diagram of the basic life energies of the Universe ‘the Universal Living Matrix’. That a form or symbolism in itself, should have any radiance or imaging effect in itself, can be hard to comprehend. Skepcicism is a great thing, but may turn into a fixed kind of belief, saying that faith moves mountains. Sceptic or not. However you choose to see it, since the beginning in 1985, it has been known, that most people are able to sense the energies around the jags of The Sevenstar. And still it seem to hold true, that every child is able to feel the streams of energy right away.

Do you believe in The Sevenstar? This is something I ask myself quite often. The answer must be a no. I rather want to explore further. In my opinion, consciousness is what is needed to know an object, to try and take off a pair of tinted glasses, to look beyond the definition of the mind. For me meditation and inner journeying has revealed extraordinary things about The sevenstar. This has to be found beyond aura vision and the likes, and not everyday experiences.
Experience that we have been receiving from users since 1985, shows that there are many who at one and the other strange way, has got rid of stuff they would otherwise have had to live with. Many have invested around 30 bugs on the star, and that may not make anyone homeless. There are wonderous things happening. If The Sevenstar was just some sort of fortune-amulet-placebo, then we who are users of The Sevenstar, would long ago have found something else to play with. The star is quite an adventure.

The moment of surprise is what I see as the main thing about The Sevenstar. The fact that you can experiment with to feel energies and effects with your bare hands. It started already in the happy eighties with the pyramid energy wave. Here one could find similar magic and surprises. The Sevenstar is just much more convenient and multi-faceted, so pyramids went out of the production for the benefit of The Sevenstar. Existing customers, health food shops and private, was actually happy with the shift across the board, and we received a stream of reports about new wonders what happened with The Sevenstar. 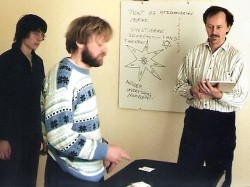 Is there any way to prove the effect of The Sevenstar? – also a fair question. All more or less controlled experiments, for example blind tasting of wine refined by The Sevenstar, which also was done with pyramids, indicated well enough that unusual things were happening, the wine tasted much better. But as soon as we started out with more systematism and repetition of the experiments, the “magic” did not always appear. As a laboratory technician, electronic technician and kinesiologist, I have also made a series of pilot experiments and tests. Experiments with Kirlian photography was uncertain (and not very pleasant), cupper crystallyzation came out with nothing significant.

Methods for detection of the effect of The Sevenstar does not lack though, even mildly said there is no real scientific evidence. Perhaps we can not even take effects of this kind of energy medicine for granted. From quantum physics we know that the observer affects the observed. But so far we are aware of a few methods. A blinded experiment with 8 bio-kinesiologists were significant enough. 10 real Sevenstars and 10 blank as controls were hidden in paper bags. The right sevenstars were found in 60-80% of the cases. Another experiment that came out significant was Portrait of a Star, where Nina Ashby scetched the aura of a persons with and without The Sevenstar without her knowing anything about The Sevenstar, or whether the person was even wearing it.

Radionics indicated the effect of The Sevenstar
A well known Danish engeneer Viggo Berthelsen developed during the 80’th an electronic/radionic device, and then in 1986 he was able to detect, that The Sevenstar was emanating energies around the jags, each of their own qualities. Viggo Berthelsen died in 1995, 97 years of age, and is mostly known for his research into nutrition supplements and minerals.

Aura video biosensor measurements indicate the effect of The Sevenstar
By several occations we have had the opportunity to test The Sevenstar with aura camera like in this article about The Sevenstar. A computer simulates the aura displaying video images interpreted via hand sensors. In fact, the technology behind is scientific. A sophisticated box using special biofeedback sensors measure things like temperatures and electrical resistance at various points of the hand. A preliminary test with 5 people fell all positive, and that was enough reason to invest in the system. After 7 month in 2012, I finished developeing some methods and analysis sheets for printing, and I published a book about the project. Many experiment have shown that the energy field of the client is balanced and amplified significantly by holding The Sevenstar at the heart. The tests require diligance and regards to insecurities of methods. Most differences are seen with people that is not users of The Sevenstar, since Sevenstar users already seem to have integrated strenght and balance from The sevenstar. Please read more at DinAuraStatus.dk.

Din Aura i levende billeder – by Jørgen A. Jacobsen (May be translated to English)

Watch the TV clip of the whole project 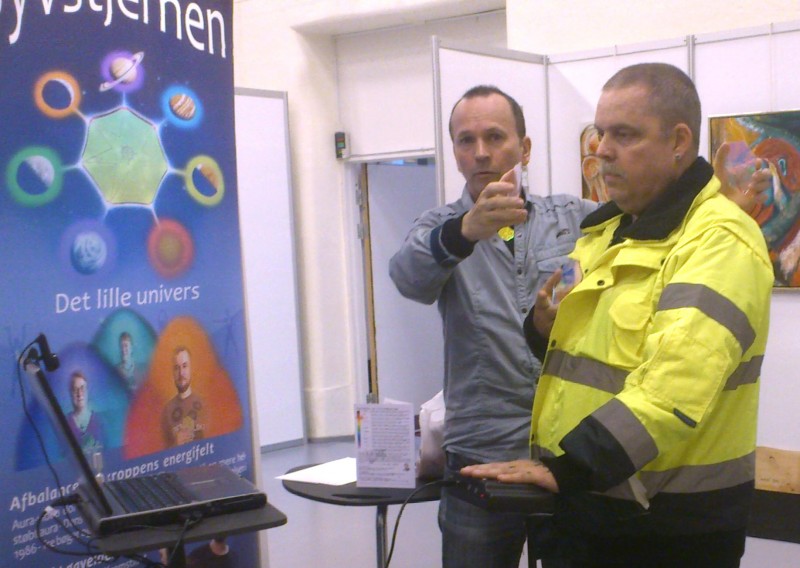 BODY – MIND – SPIRIT health fair in Aarhus 2012 was reasonable visited. The sale was covering nearly the cost of the stand, and it is OK for now. Almost everyone could feel the different streams of energy around the star’s points, and see their aura become richer through aura video, with The Sevenstar held in front of the heart.

Again, I invite everyone to maintain a healthy scepticism, but forget about faith and placebo, just try it out 😉

In the lab only few myths survive. And even though effects of energy medicine like The Sevenstar, pyramids and homeopathy, can be fragile, it might be worth investing Sevenstar-time in the lab on tests such as the raising of vegetable juice, and also radionic device testing like that of Viggo Berthelsen, may be succeded. Experiments with animal behavior and attraction to The Sevenstar, would also be interesting.

Preliminary studies, focussing on cardiac health is made. For now it seem that a certain pulse oximeter may show a before and after situation. 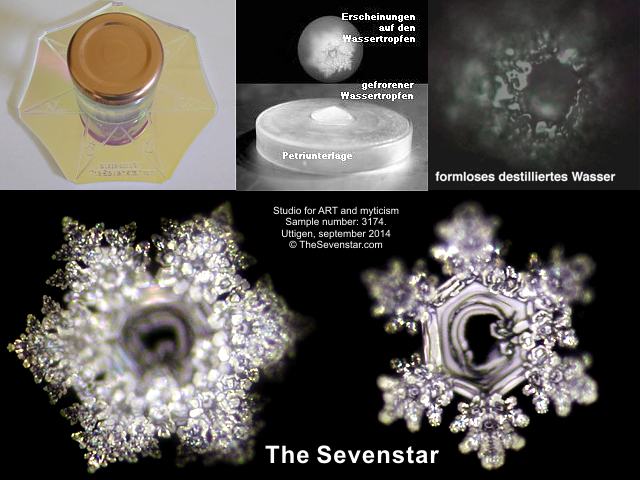 Crystallization power of The Sevenstar
September 2014 we recieved results from a lab in Swwitzerland preliminary crystalization results and images. Things look promising. Conrol for the test is destilled water, and comparing, it may be easy to conclude, that there is a fantastic difference. To create crystals of destilled water require some power. Dr. Emoto invented the method and published the book The Hidden Messages in Water. And with The Sevenstar, the crystals can really be seen as beautiful and positive. This points to a strong positive transfer of vibrations, similar in effect to Grander water.

If something has to be scientifically proven, it does not hurt to be a multi millionaire. However, this is something none of us behind The Sevenstar has become promoting it. In the early years of explosive popularity of The Sevenstar, there was associates who got the good old taste for gold, trying to run off with the whole idea. But business has not been the goal of us who is driven by exploration and adventure. 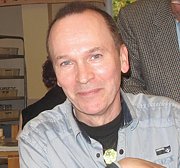